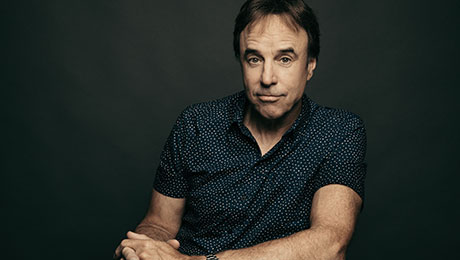 Emmy and SAG-nominated actor, comedian, and author Kevin Nealon is best known for his nine-year stint as a cast member of NBC’s Saturday Night Live, and has received critical acclaim for his role in the Showtime series Weeds. Kevin currently stars on the CBS-TV comedy series Man With A Plan, produces and hosts digital series Hiking with Kevin, and tours his stand-up globally.

Nealon’s self-produced, edited, and hosted web series Hiking with Kevin is exclusively available on his YouTube channel of the same name. In the series, Kevin interviews his A-list celebrity friends on hikes throughout the country.

As one of the longest running cast members on NBC’s Saturday Night Live (1986-1995), Nealon created some of the show’s most memorable characters; his recurring role as an anchor on ‘Weekend Update’ helped make the sketch a show staple. In 1988, he earned an Emmy nomination as part of the SNL writing team.

Currently, Kevin resides in Los Angeles with his wife and son.