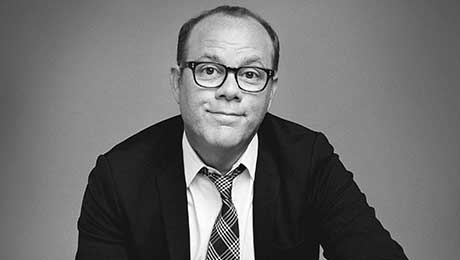 With more than 20 years as a stand-up comedian, Tom Papa is one of the top comedic voices in thecountry finding success in film, television and radio as well as on the live stage. Tom has released three stand-up specials, Human Mule, Tom Papa: Freaked Out, and Tom PapaLive in New York City. He is the host of the hit podcast and SiriusXM show, Come to Papa, aweekly hour-long show exploring the funny side of life, sometimes with celebrity guests. On the small screen Tom co-starred with Michael Douglas and Matt Damon in the HBO film, Behindthe Candelabra, which won 11 Emmys. Tom has also guest starred on The Jim GaffiganShow and Inside Amy Schumer. Personally chosen by Jerry Seinfeld, Tom hosted the NBC series, The Marriage Ref, which ran for two seasons. When it comes to feature films, Tom was seen in Chris Rock’s film Top Five, he starred opposite MattDamon in The Informant, and he appeared in Analyze That opposite Robert DeNiro. He also wrote andvoiced some of the DreamWorks animated feature Bee Movie. Most recently, Tom was seen as the hoston the Food Network’s Baked.

On May 12, Tom released his second book, You’re Doing Great!: And Other Reasons To Stay Alive, a collection of essays on how people really live in modern America and what’s truly good and wonderful about our lives. Tom’s first book, Your Dad Stole My Rake: And Other Family Dilemmas, was released on June 5, 2018 from St Martin’s Press, making “Summer Must Read” lists from Parade Magazine to The New York Post. The comedic book takes a hilarious look at the host of characters in our families with bizarre, inescapable behavior.