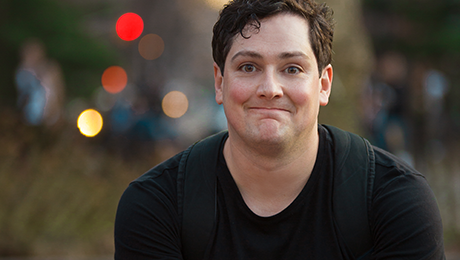 Joe Machi is a comedian based out of New York City. He has performed on Last Comic Standing, Comedy Central, and Fox News.

Machi wad born and raised in State College, Pennsylvania. He is the son of Frank Machi, a retired retail manager and Catherine Machi, a retired Catholic school teacher. In 1997, Machi graduated from State College Area High School. He graduated from Penn State University in 2002. Before becoming a comedian, he worked as a customer service manager for a supermarket and a human resources assistant for a media company.

In 2006, Machi decided to try stand-up comedy and moved to NYC, where he quickly passed for late night at New York’s Comic Strip Live and at four other NYC Comedy Clubs, including Stand Up New York and Caroline’s on Broadway. Machi won the NY Underground Comedy Festival’s Emerging Comic’s Contest in 2010. Three months later he was a finalist in the New York Comedy Festivals NY’s Funniest Person Competition. In 2011, he was runner up in the Boston Comedy Festival’s New York Comedy Contest, which earned him a trip to the Boston Comedy Festival. He was then profiled in the NY Daily News for making the Elite Eight in Caroline’s March Madness Final Four Competition.

In 2012, Machi was selected by Country Music Television to participate in their “Next Big Comic” Competition but could not compete because he had worked for CMT’s parent company. Then he received a big break by having a stand out set on NBC’s “Late Night with Jimmy Fallon.”\

After taking 4th place on Last Comic Standing ’s 8th season in 2014, Machi started touring the United States as a headlining stand-up comedian. He has also featured on The Greg Gutfeld Show and Red Eye on Fox News. He performed his own Comedy Central “Half Hour” special in September 2016. In December 2018, Machi performed on The Tonight Show with Jimmy Fallon. In 2019, Joe took part in Skankfest in Brooklyn and “Just For Laughs” Digital Festival.

Machi has become a staple on New York Comedy Club and alternative comedy shows. His influences include everyone he’s ever talked to. He is known for his high-pitched voice, for which he makes fun of himself. Machi says that he and Mike Tyson are both men cursed with high-pitched voices.