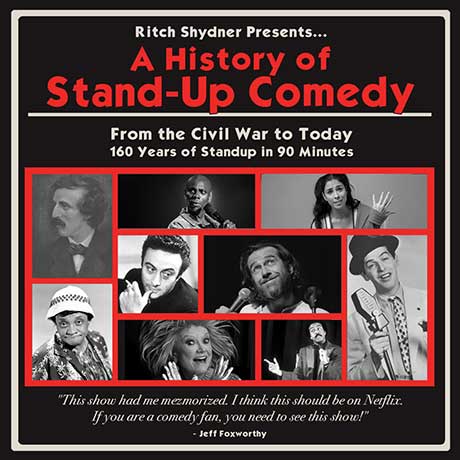 Standup Comedy – its history and what it says about America.

A funny and insightful 90-minute multi-media presentation about the roots and flowering of an original American art form, stand-up comedy. The stories of forgotten trailblazers, martyred iconoclasts, and familiar stars show how the simple act of one joker taking on a crowd became one of our most popular entertainments and a cultural weathervane.

This original American art form is tracked – what their jokes said about the country and how events changed their comedy – from the first stand-up during the Civil War to the today’s social critics with a license to kill with laughter. 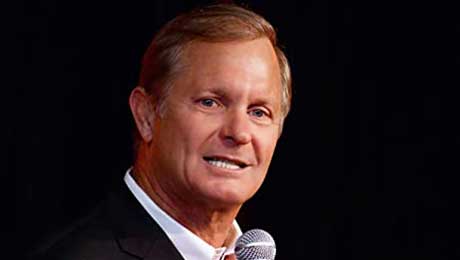 In the 1980’s, Ritch Shydner made numerous appearances on TV, including HBO and Showtime Specials, Late Night with David Letterman and The Tonight Show with both Johnny Carson and Jay Leno. He played Al Bundy’s co-worker on “Married with Children”, and made guest appearances on many other TV shows, such as “Designing Women” and “Roseanne.”  Ritch was able to translate his modest success on TV into an obscure film career, appearing in Steve Martin’s, “Roxanne,” and Eddie Murphy’s, “Beverly Hills Cop II,” before moving on to minor roles on smaller pictures. Ritch wrote for sitcoms such as “Roseanne”, “The Jeff Foxworthy Show,” and HBO’s “The Mind of the Married Man.” In 2006 Ritch was co-author of a book on stand-up, “I Killed”.

In 2010 Ritch produced and performed in an award winning documentary on the world of stand-up comedy, “I Am Comic”. In 2016 Ritch wrote a movie adaptation for HBO of Bill Maher’s book on the 1979 New York City stand-up scene, “True Story”.  That same year, he released “Kicking Through the Ashes – My Life as a Stand-up in the 1980’s Comedy Boom.”

Jay Leno: “And remember, Shydner, don’t tell anyone you wrote those jokes for me.”

Jerry Seinfeld:  “Ritch Shydner is a terrific comedy writer and definitely one of the good guys.”

Jeff Foxworthy: “Ritch helped me write two albums, both of which were nominated for Grammys.  I’ve always thought that he was one of the best stand-ups ever.”