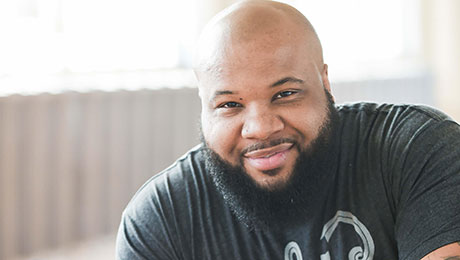 Mike Paramore is the guy you fight to sit next to in a movie theatre, on a long car ride, or during a boring lecture. His natural ability to infuse everyday situations with energetic, uplifting humor, combined with a natural ability to put you at ease is key to his personal brand of comedy.

In addition to performing at the 2010 Stellar Awards and being a part of the 2012 Just for Laughs Comedy Festival Mike was a finalist in the 2014 World Series of Comedy in Las Vegas, Winner of the 2015 Cleveland Comedy Festival, Winner of the 2016 Laughing Devil Festival in New York City & Winner of the 2017 Laugh Fest’s best in the Midwest competition.
​
He was a featured on AXTV’s Live at Gotham in NYC, as well as FOX’s hit show “Laughs”. His smooth delivery and​ powerful punchlines make him a force in stand-up comedy, which is very apparent in his debut album “The Things We Tell Ourselves”, available now on iTunes and Amazon and his Dry Bar Comedy special ‘You’ve Just Been Flirted With’.