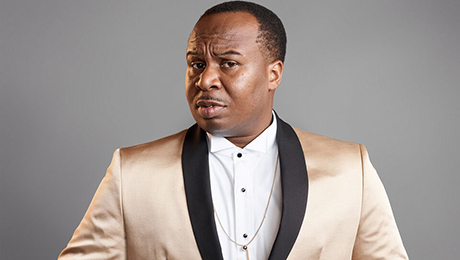 Roy Wood Jr. is an Emmy-nominated comedian, writer, producer, actor, radio personality, and podcaster primarily known for his stand-up comedy and work as a correspondent on Comedy Central’s The Daily Show since 2015.

He has entertained millions across stage, television, and radio. Before The Daily Show, co-starred in three seasons in TBS’s Sullivan & Son, and he remains a regular guest star on various ESPN shows and the MLB Network. He has been published in The New York Times. Forbes declared he is “One of comedy’s best journalists,” Entertainment Weekly has described his thought-provoking comedy as “. . . charismatic crankiness. . .” and Variety Magazine named him “One of 10 Comics to Watch in 2016.”

In 2006, he debuted on network television on The Late Show with David Letterman. In 2008, he appeared on HBO’s historic Def Comedy Jam and was selected by America as one of the top three finalists on Last Comic Standing on NBC. He has appeared on Late Night with Seth Meyer, Conan, The Tonight Show with Jimmy Fallon, and The Late Show with Stephen Colbert. He also performed on numerous USO Tours for our Troops stationed everywhere from Guam to Iraq to the Philippines.

During the pandemic, Roy has spent time raising money for the displaced staff of comedy clubs through tipyourwaitstaff.com and Laugh Aid. In his hometown of Birmingham, Alabama, his philanthropic endeavors include supporting Workshops, Inc., which enriches lives by helping people with disabilities and other employment barriers achieve their vocational potential. The DUBS Baseball Academy is an investment in sports to change lives. STAIR of Birmingham, where tutoring empowers students to read better and dream bigger. Also, I See Me, Inc., where the mission is to dismantle the school-to-prison pipeline by increasing the literacy rates in children of color by engaging them in the literature that reflects their culture and image.