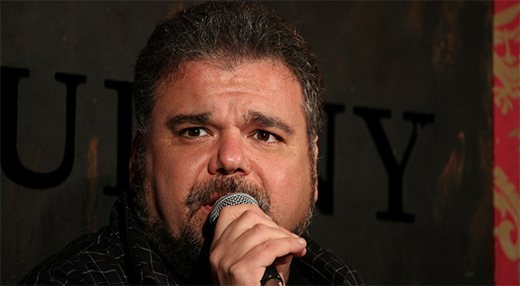 FAKE BIO
Brian Scolaro was born in a log cabin in Eggplant, West Virginia in 1876. And was visited during the night by Three Shephards. They beat the shit out of him for six hours. His mother was a ghost pimp and his father was a washing machine. Brian went to High school in the Philipines, where he spent four years learning to become an asshole. He received notoriety when he discovered a cure for “sight” by poking people in the eyes. Brian was killed by a large bear when he was sixteen, but he did not let that stop his acting dreams. He moved to Hollywood in 1872 and now sells garbage under a bridge.

REAL BIO
Brooklyn born Brian Scolaro is an actor and stand-up comedian. He got his start at the The Comedy Cellar in NYC, and he is most known for his appearances on “CONAN”, his half hour Comedy Central special “COMEDY CENTRAL PRESENTS: BRIAN SCOLARO”, as Brian on ABC’s “A MILLION LITTLE THINGS”, as Doug on TBS’s “SULLIVAN AND SON”, Gordon on NBC’s “THREE SISTERS”, and as Stuart on FOX’s “STACKED”. About his role of Stuart Miller on “Stacked”, The LA Times said “Scolaro is terrific. An actual sitcom find.” About his role as Doug on “Sullivan and Son”, Brian Doyle-Murray (Caddyshack) said Brian is “one of the best I’ve ever seen.”

He has gone on to share his original and yet old school style of stand up on “CONAN”, “THE LATE LATE SHOW WITH CRAIG FERGUSON”, “GOTHAM COMEDY LIVE”, “LATE NITE WITH CONAN O’BRIEN”, COMEDY CENTRAL’S “LIVE AT GOTHAM”, “COMICS UNLEASHED ” and finally his very own half hour special “COMEDY CENTRAL PRESENTS: BRIAN SCOLARO” which still airs multiple times a year and is one of their popular downloads on Comedy Central’s iTunes page.  He has four comedy albums available on all platforms and is also the author of the book “How to Punch a Monkey” on Amazon. Comedian Tom Rhodes is quoted saying “He has a hugely inventive style and I go out of my way to see him perform whenever I can.” And Marc Maron said on WTF podcast, Brian “might be the funniest fuckin person alive.”