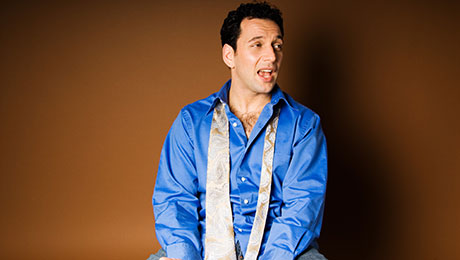 Looking to see both the podcast and Aaron Berg and Geno Bisconte shows? First purchase tickets to the In Hot Water LIVE podcast and opt-in to receive marketing material by email. The coupon code will be sent to the email address provided after your purchase is complete. It can then be used to receive $10 off the ticket price for Aaron Berg and Geno Biscontes stand up show.

Bisconte’s slash and burn style of back stabbing insults show he is a true comic guildsman. His style is reminiscent of a bowling machine setting up his audience, one person at a time, for the inevitable knockdown. Bisconte’s soapbox delivery includes pornography as therapy, the robotic dog craze, beautiful breasts, lobster bibs and the beauty of laughing at the forbidden. Bisconte questions the life and death ethics of tipping (yes to Starbucks employees but not to airline pilots) and why family dysfunction is just, sometimes, so darn funny. 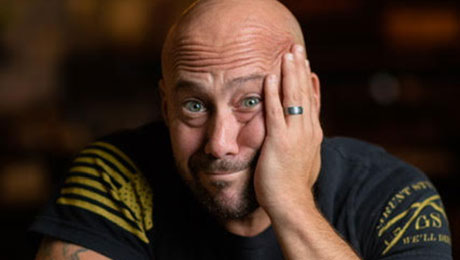 Aaron Berg’s 25 Sets is now available on Amazon.  He made his Comedy Central debut on THIS IS NOT HAPPENING in 2016 and has made two appearances on AXS TV’s LIVE AT GOTHAM as well as an appearance on BIG JAY OAKERSON’S “WYFD?!?” on Seeso.  He has also appeared in Comedy Central’s Roast Battle Season 2.  He also just recorded his 4th album this fall at the Stand NYC.

Aaron is half of the daily morning show “IN HOT WATER” which can only be viewed on COMPOUNDMEDIA.COM .  He is also an author and has two books out currently.  Mr Manners and American Etiquette.  His three albums are available on iTunes and Amazon “COMEDY COLTRANE”, “Mr. manners Live From Long Island City” and “UNSCRIPTED.”

Aaron is the host of FRANTIC MONDAYS at the STAND NYC can be seen every night doing stand-up in NYC.