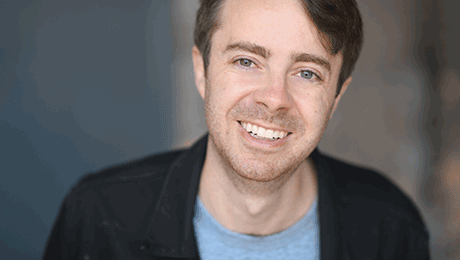 Geoffrey Asmus began performing stand-up in 2013 immediately after wasting $143,548 in college. Within a short time Geoffrey won Comedy on State’s “Funniest Person in Madison 2015” and Penguin Comedy Club’s “Funniest Person in Iowa 2015,” both times beating out the guy who invented meth, Quentin.

Soon after Geoffrey was selected as a ‘New Face’ performer at Just For Laughs Montreal and was featured on FOX’s ‘Laughs’ and Kevin Hart’s LOL Network. He has also performed at the Laughing Skull, Bridgetown, Limestone and Boston comedy festivals and won 3rd place in Atlanta’s 2017 Laughing Skull festival. Geoffrey has opened for Brian Posehn, Aparna Nancherla, Todd Barry, Daniel Sloss and Alonzo Bodden among others.

Onstage and offstage Geoffrey will not make eye contact, which is a blessing for all.

Here’s what the pundits are saying –

“Geoffrey Asmus was the most memorable of the comedians…

“You had one good joke but I don’t remember it.

— A friend who was in the bathroom the whole time

“Asmus changed the energy from laid-back observational humor to the best kind of awkward, self-aware, quirky humor money can buy. His material spans from adult literacy to his sex life, or lack thereof. He rides the thin line of absurdity with a great deal of skill, giving the audience a very funny, painfully awkward show.