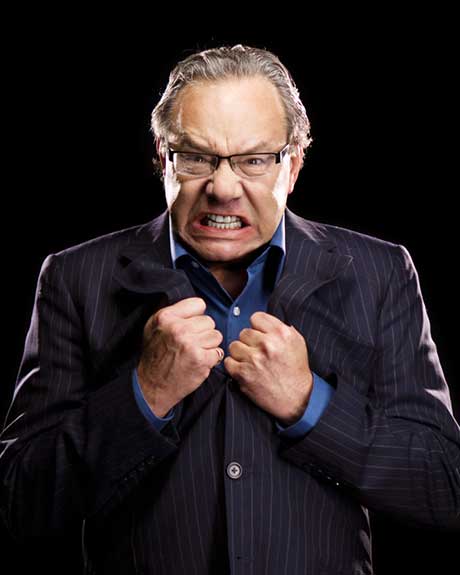 Known as the king of the rant, Lewis Black uses his trademark style of comedic yelling and animated finger-pointing to skewer anything and anyone that gets under his skin. His comedic brilliance lies in his ability to make people laugh at the absurdities of life, with topics that include current events, social media, politics and anything else that exposes the hypocrisy and madness he sees in the world. Receiving critical acclaim as a stand-up, actor and author, Black has performed for audiences throughout Europe, New Zealand, Canada and the United States. In 2012, he performed eight sell-out shows at Richard Rodgers Theatre on Broadway. Black has filmed two specials for HBO, including “Black On Broadway” and “Red, White and Screwed.” The latter was nominated for an Emmy® in 2007. He had a regular feature for two seasons on “Inside the NFL” (for which he earned a Sports Emmy) and in 2006, he was asked to participate in “Comic Relief.”

Black has penned more than 40 plays, many of which have been produced around the country. “The Deal,” a dark comedy about business, was made into a short film in 1998 and picked up by the Sundance Channel. In 2011, his play “One Slight Hitch” was produced at the Williamstown Theatre Festival and then again in 2012 at both the ACT Theatre in Seattle and The George Street Theatre in New Brunswick. In 2015, Black notably voiced the character “Anger” in the Academy Award winning film from Pixar, “Inside Out.” The film is about an 11-year-old-girl, Riley, who is dealing with a move across the country, and wrestling with the emotions inside her head: Joy (Amy Poehler), Sadness (Phyllis Smith), Fear (Bill Hader), Disgust (Mindy Kaling) and, Lewis Black. Early film pitches actually named the comedian to illustrate how an iconic voice like Black’s could bring a character like Anger to life. Black, who’s a fan of all things Pixar, calls the opportunity a career-defining role. “I knew from the very beginning that this was going to be special,” he says. “I’ll be remembered as this little red guy who yells and his head goes on fire.”

Black resides in both Manhattan and Chapel Hill, N.C. Still loyal to his alma mater, he’s worked with UNC students to create the Carolina Comedy Festival, a yearly festival on the UNC campus that highlights performances and provides workshops and lectures for budding comics, writers and performers. With his involvement at UNC, Black continues a life-long commitment to education and the arts. He continues to tour heavily, playing countless dates each year and providing a cathartic release of anger and disillusionment for his audience. In his leisure time, Black likes to play golf, even though golf hates him.