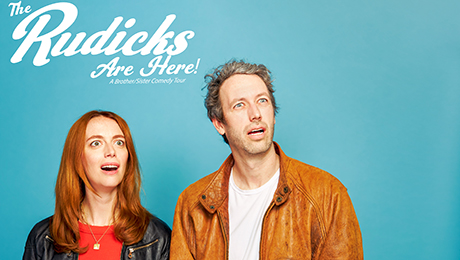 Andrew Rudick is a nationally touring standup comedian, writer and actor. One of the fastest rising comedians in the Midwest, his comedy can be heard regularly on SiriusXM and his debut comedy album opened near the top of the Apple Music charts. Combining a midwestern charm and high-energy absurdism, Rudick’s stand-up is a frequent hit both on stage and across social media on Tik Tok and Instagram. His relatable energy also earned him an appearance on HGTV’s “Design Fails.” Rudick also loves Fleetwood Mac and doesn’t care who knows it.

Leah Rudick is an actor and comedian based in Los Angeles. Her viral comedy and character videos have amassed her nearly one million followers and over 15 million likes on TikTok & Instagram. Her first standup special, Everything is Fine! can be seen on the Seed & Spark streaming platform.  Her standup was also featured in Coming to the Stage (Amazon, Pluto TV). Recent comedy festival appearances include SF Sketchfest, Laughing Skull, All Jane Comedy Festival & Flyover Fest. She is the co-creator/co-star of the critically acclaimed web series Made to Order which was featured as one of “6 Brilliant Web Series” in Marie Claire. She also co-starred and co-wrote the indie feature Sweet Parents, which received top prizes on the festival circuit and is currently available to stream on all major platforms. Favorite TV credits include HBO’s High Maintenance and IFC’s Commuters.

Leah is currently touring with her standup comic brother Andrew as the Rudick Siblings.  Spring boarding off her huge TikTok popularity, they are selling out shows across the country.  She will shoot her first one-hour comedy special with Comedy Dynamics in April 2023.