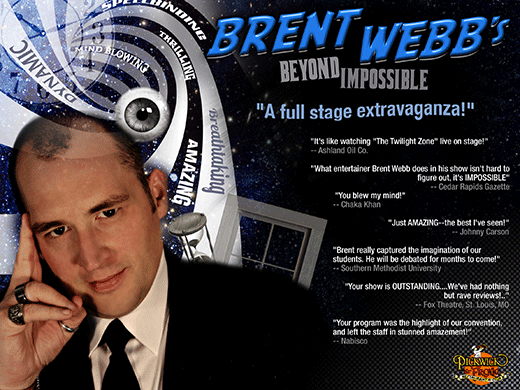 Brent Webb is astounding. It’s just that simple. He will amaze you and make you laugh. Using what he calls “heightened sensory perception”; he will know what’s on your mind BEFORE you do. He will predict with uncanny accuracy your actions BEFORE you make them.

Webb is widely considered one of the world’s leading Mentalists. Brent performs an interactive, mind reading presentation that will have you questioning what is real and unreal, and what is possible with the untapped powers of the human mind. Webb’s show is a breathtaking, dramatic, and energetic voyage to the farthest reaches of your mind.

Born in Ohio, Brent realized early on ability to “sense” which hand contained a coin, in a game played with him by his father. As the years progressed, so did his skill level, and Brent was amazing classmates with his ability to read their minds.

Brent’s career has taken him from the Las Vegas strip to London, and Miami to Madrid. Brent has appeared with superstars like Joan Rivers, Chaka Khan, Kenny Rogers, Whitney Cummings, and Dionne Warwick, headlined on Crystal, Princess, and Norwegian Cruise Lines, in his own shows in Vegas, Atlantic City, and Reno, for sports teams like The Cleveland Browns, Arizona Diamondbacks, and Los Angeles Dodgers, performed TWICE at The White House, and recently completed 16 months starring in the blockbuster touring show “Illusionarium”, including two performances for the USA teams at the Olympics in Rio.

Webb believes everyone possesses ESP, it’s just the degree that differs. When performing for major corporations around the globe, Webb combines his show with the motivational message that “with an open mind, nothing is impossible”.

More than just a catch phrase, Webb believes in his message. “The moment you believe something is impossible, in that second, it becomes impossible. If you say to yourself, I’ll never be able to do that, you’re right…you never will. The secret is to keep your mind open to new possibilities.”

Brent spends most of the year on the road, and loves what he does. That shows in his performances, and Brent is rewarded with standing ovations from amazed audiences the world over.
One thing is certain; Brent Webb is a showman who combines unbelievable mental experiments with a natural born talent for entertainment, and a charming stage presence, to create an experience that is unequalled on the stage. Webb divides his time off the road at homes in Ohio and Palm Springs, CA. 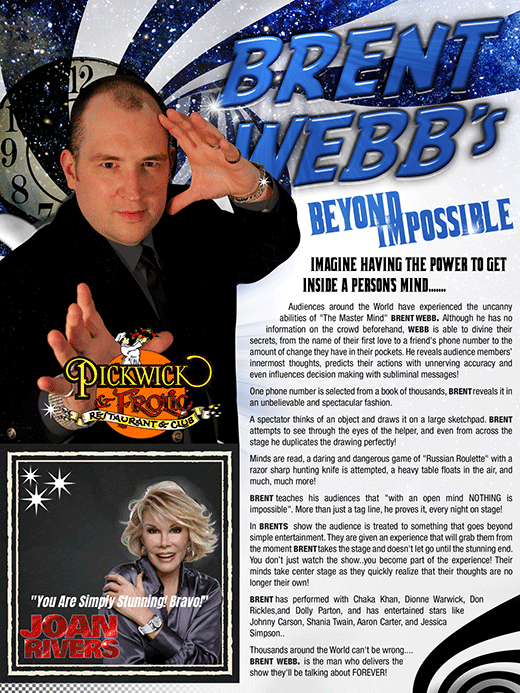